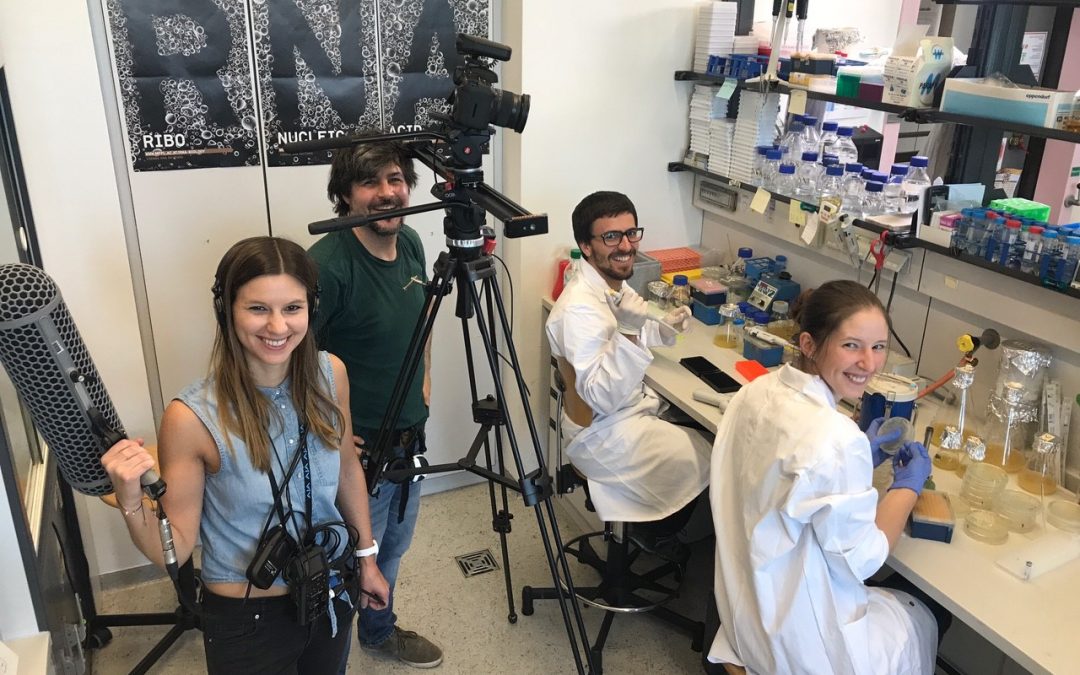 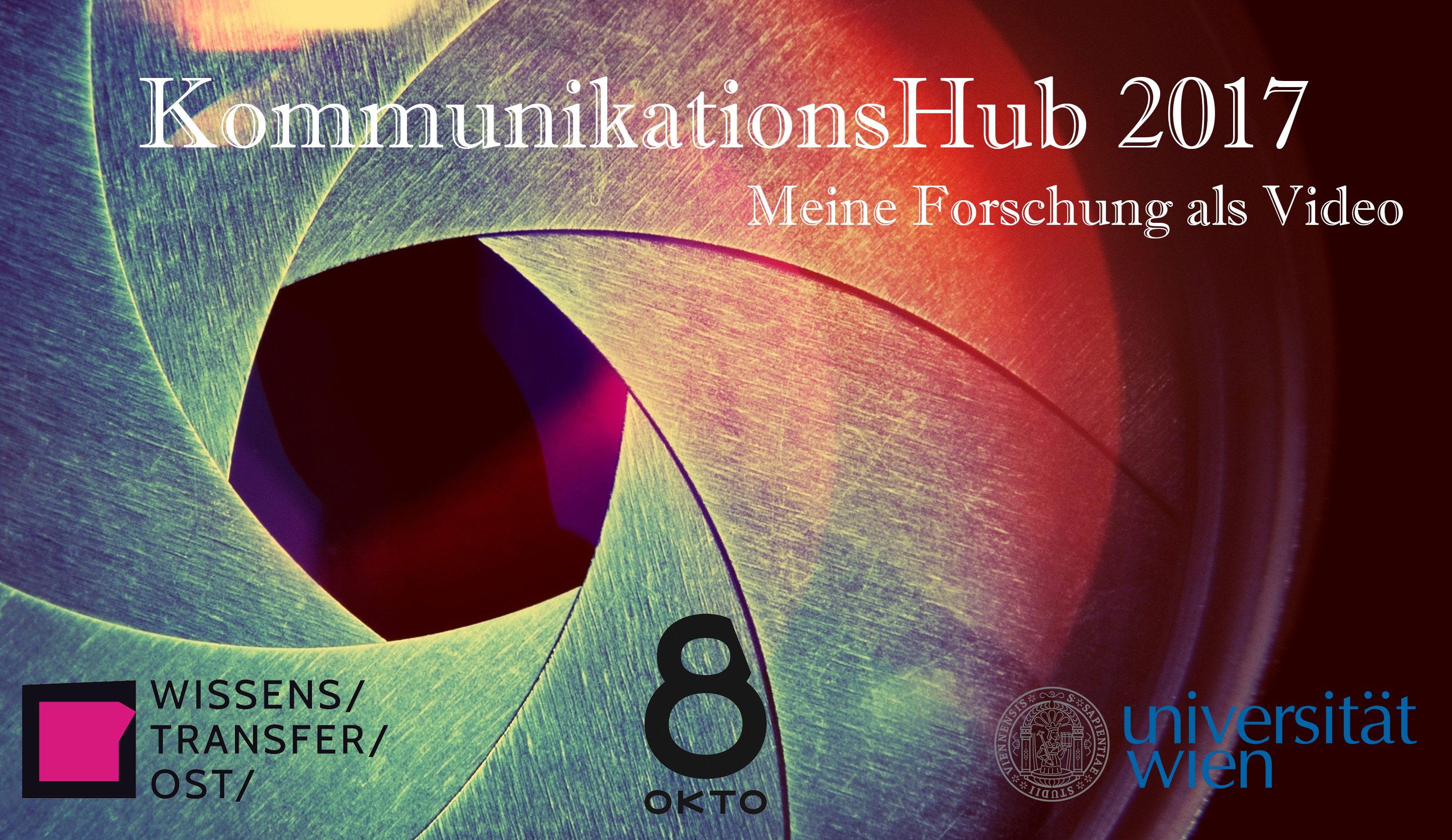 Smell sensing 2.0: Towards an electronic nose using graphene based bioelectronics

By combing the world of electronics with biology we aim towards the realization of a versatile, portable, point-of-care biosensor platform that can ultimately smell disease such as cancer in exhaled breath and analyze bodily fluids for pathogens, thus enabling an early detection warning system.

„We really grew with the project and learned a lot about storytelling and video production. It started out as a relatively simple idea in our head and soon developed into a very complex project that needed to be well coordinated and planned. The highlight of course was the shooting and to see how all the puzzle pieces were put together in front of the camera and later in the cutting room. (Johannes Bintinger, Institute of Applied Synthetic Chemistry, Technical University of Vienna)

The environmental analysis group at the Department of Analytical Chemistry at the Faculty of Chemistry at the University of Vienna developed a green technology to produce 13C labeled metabolites and lipids from yeast. This innovative in vivo labeling approach reduces errors in mass spectrometry based quantifications significantly and resulted in the foundation of the University spin-off ISOtopic solutions.

„Our Experience as film makers was something completely new… At first we thought we do not have any idea how to present such a complicated research dealing with isotope dilution to increase accuracy in quantification processes using mass spectrometry.  We are analytical chemists and the description of our research sounds sometimes a little bit less fancy and we knew from our previous experience that we easily loose people while telling them that we are actually doing. In the first meeting at Okto we discussed what should be the logline of the film, we really could not agree, but Barbara Eppensteiner came up with an easy one: Fight Against Error and we stuck to it for the film. Afterwards, it was about finding a suitable story. We had a very interesting media training with Markus Mooslechner, who gave us some basic tools how to write the Story of the Hero. Using these very simple pattern our whole research could be expressed much easier. We only thing missing after that was how to present the error we want to fight, we asked ourselves what is our protagonist? We were thinking of a tumble weed, error bars in an excel sheet etc. And in the end we found something, we took the picture of the falling king, which came to my mind as I am a hobby chess player.  We also got some nice feedback by the group of other filmmakers, who came from completely different disciplines such as social sciences and even were able to understand our story. Using the experienced help of Roland and Evi, we finally started the actual filmmaking process after the whole planning procedure. We could immediately see that filmmaking itself is a research-we even found a lot of research and video production parallels  with Roland and Evi-  and at the same time we learned that filmmaking is an art putting together the right gut feeling, light, sound and experience. Evi had the great idea to use a time lapse of our laboratory work and the whole group was running around in the clean room pretending to work for 20 min. We focused on many details such as the sound of the falling king- don’t forget he was our protagonist. Overall, we had a fun filming day before we met for the cutting and voice over at Okto. My poor boyfriend Matthias had to do the voice over dealing with such complicated word constructions such as novel mass spectrometry based metabolomics approaches. Roland even went back to the University in order to film the tree in front of the institute to represent life science and a green technology. In the end we were super happy with our video as it shows what and how the doing our research and at the same time we do not look fat and disgusting wearing a clean room suite in the video. Even our boss Prof. Gunda Köllensperger- who did not want to participate in our video and explain mass spectrometry as she said it is our video so we need to speak in front of the camera ourselves- said that she really liked and that we found a nice way of explaining isotope dilution using chess pieces.

We invite you to the research laboratory where we use bacteria as an excellent model system for studying the fundamental processes of life. Importantly, this research provides the basis for new technologies and practical applications. Viva bacteria –  get ready to share our passion!

Communicating your research is important. We are used to talk about it at the conferences for the very specialised crowd. In this project we were aimed to make it “a video for everyone” (with focus on fundamental research) and that was a big challenge. But the trainers from OKTO helped us a lot with finding the right way of talking to a broad audience. We had no idea how much work it is to make a five-minute-video! That’s impressive and we like our result a lot!

This website uses cookies to improve your experience while you navigate through the website. Out of these cookies, the cookies that are categorized as necessary are stored on your browser as they are essential for the working of basic functionalities of the website. We also use third-party cookies that help us analyze and understand how you use this website. These cookies will be stored in your browser only with your consent. You also have the option to opt-out of these cookies. But opting out of some of these cookies may have an effect on your browsing experience.
Necessary immer aktiv
Necessary cookies are absolutely essential for the website to function properly. This category only includes cookies that ensures basic functionalities and security features of the website. These cookies do not store any personal information.
Non-necessary
Any cookies that may not be particularly necessary for the website to function and is used specifically to collect user personal data via analytics, ads, other embedded contents are termed as non-necessary cookies. It is mandatory to procure user consent prior to running these cookies on your website.
SPEICHERN & AKZEPTIEREN